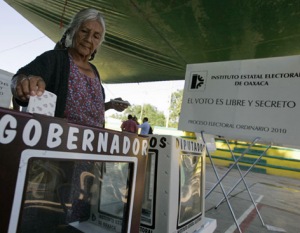 The cost of electronic voting continues to be a controversial issue in some countries, especially in those such as Peru and Colombia, where e-vote is currently being implemented.

One of the strongest arguments that have arisen this year in favor of automated elections and the initial investment they represent, was exposed by the Manager of Electoral Systems and Informatics of the Peruvian National Office of Electoral Processes, Jorge Luis Yrivarren. He stated that with this mechanism, the costs in the voting places of different electoral districts are reduced or even eliminated. This is possible because of the paper is not used and because of the reduction of the number of polling stations.

“Undoubtedly, the voting ability that an electronic table has is higher than a traditional or manual table, where there is a maximum of 200 voters and the waiting queue is greater. For example, an electronic voting table can have four cabins and, if there are over 600 voters as a maximum, each table can serve 2,400 people. That’s part of the savings”. Yrivarren added that installing an electronic table takes 15 minutes, similar to the time it takes to close a table after the set time.

Yrivarren listed success stories of electronic voting in India, Philippines, Belgium, Brazil and Venezuela. He also commented on the process of Estonia and Indonesia, where non-contact electronic votes via the Internet were employed. In Estonia, the remote vote was used by the citizens residing in that country who wanted to vote in parliamentary elections of June 2009. Because of the characteristics of their ID documents, voters had to buy a $ 10 electronic reader to connect data to their computer so it could read the electoral document, which included an electronic signature and password. This payment was directly made by the census.

Another nation that also investigates the economic impact of electronic voting is Mexico. The special committee of the Federal Electoral Institute presented a report on its feasibility. One of the conclusions of the report is the complexity of calculating the cost of their introduction claiming that it depends to a large extent on the scope of legal reforms. They estimate that the inclusion of 666 thousand electronic voting machines for the 2012 pilot program, would cost around 17.8 million pesos ($1.43 million) and 76.3billion pesos ($ 6.15 million), according to the modality.

The study published in the Mexican journal La Jornada reports that the institute forecasts point to install four electronic voting machines in each of the 300 electoral districts (1.200), which will also have one more for training purposes. 10% will also be added as a reserve and will include 16 teams to assign them for the vote of Mexicans abroad.

Ecuador is another nation that has been widely discussed cost and the implementation of electronic voting. The former president of the late Supreme Electoral Tribunal (TSE), Carlos Aguinaga, stated in January 2009 that an electronic voting system in Latin America is at an average of $ 8 per voter. “From there you can find more expensive or cheaper systems, taking into account that it will be deployed in 100%”.

Returning to the Mexican case, some experts say that although the implementation of e-voting is a high investment, it is also represents long-term savings. This appreciation is related to the fact that the transformation requires to disburse a considerable sum of money in equipment, human resource training and voter education for the adaptation of voters. However, once the system is automated, the costs reduce significantly because the amounts for the following processes are mostly related to maintenance of the technological platform, but not so the imprinting of ballots, adequacy of thousands of tables, and the staff required to deliver the vote is significantly reduced.