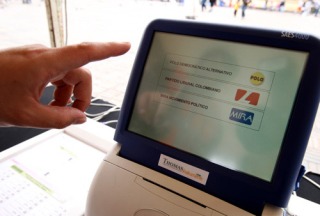 Colombia’s countdown to e-voting has begun. The advisory commission for the implementation of a new electoral system cleared the way and gave the go-ahead for the country to automate the internal elections of parties and political movements scheduled for September 29.

With this decision, the Registrar’s Office will undertake a task for which it has been preparing for years: modernizing Colombian voting with the aid of electoral technology. The test will consist in allowing the electorate to experiment with two models of e-voting.

One of these models uses Precinct Count Optical Count (PCOS) devices. This is a procedure that automates tallying by using a ballot box with an optical scanner, which in turns verifies special ballots designed for this. The ballots are manually introduced in the machine, thus allowing for the conservation of a receipt. Then, the tallying device identifies the ballots and registers the votes, tallying them in the machine’s memory.

The second option is known as the Direct-Recording Electronic (DRE) system, which consists in touchscreen devices on which voters directly mark their votes. Ballots are stored in the machine’s memory or in a storage device if used. At the end, the machine prints a vote receipt.

The Registrar’s Office will be in charge of defining what types of e-voting will be used in September under these two modes.

During the event, the electoral body will test out the performance of the machines and the effectiveness of the system, but it will also be able to take note of the logistic needs (infrastructure), the requirements for voter and tech personnel training, and those for scrutiny, result transmission, security, and auditability.

Colombia is getting close to the automation of its elections. In 2004, the Law commanded the implementation of e-voting, but governments have stopped the adoption of technology. After next September’s test, electoral advancement will no longer depend on plans or proposals, but on the decision of the authorities to strengthen suffrage, and along with it, Democracy.