During the 2016 Peruvian presidential elections, both manual and e-voting had setbacks, the former due to its inability to cope with the challenges posed by close margins (i.e. the need for a quick and precise count), and the latter due to a lack of technology updates.

Having this poor performance as a reference, the Peruvian e-voting model will experience a trial by fire in December, during the country’ s municipal elections, given that its effective use could be the push the country needs to finally embrace its full adoption, or end up paralyzing it.

In this new channel, the National Office for Electoral Processes (ONPE), has decreed that 12 districts will use an e-voting model (in-person) designed by the office to choose some of the 18 mayors and 90 aldermen.

Another six locations will employ an Automated Counting System (SEA), which uses a computer for the transcription and transmission of results to a tally centre, as opposed to a manual process.

The Peruvian e-voting system consists of a card that must be inserted in the voting machine to activate options on a touchscreen. The voter presses their choice, which the system processes and stores, before printing a voting voucher at the end.

Until now, it is not known whether the electoral organism will perform any upgrades to the automated vote.  Although the ONPE followed the best practices in the region to design their model, the technology has not been updated in years, and they also neglected the logistics and preparation for the process, which in 2016 translated in an almost total lack of information of the voters and poll workers.

Starting from this fact, and 18 months since the last election, there is the hope that the electoral body has corrected these flaws, so they can give the country the secure and transparent process that electoral technology can provide.

The importance of making these changes lies in that, if there is actual progress in the adoption and application of e-voting technology, the noncommittal stance of Peruvian authorities toward e-voting could finally change.

Peru’s Onpe designed a voting machine, but it will test out technology from three foreign companies. 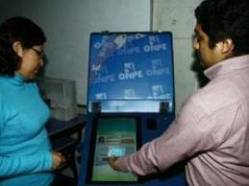 On July 7th, Peru will once again carry on the task of showing the country the benefits e-voting can bring to the electoral system. The National Office for Electoral Processes (ONPE) invited three companies to test out the effectiveness of their technology in the Cañete district in the town of Pacarán, during the recall referendum for municipal authorities.

The foreign expert companies deploying their faculties in Peru are Smartmatic, a London-based multinational, Colombia’s Voting Solutions, and Argentina’s Magic Software Argentina (MSA). The goal for all of them is to exhibit what their electoral technology can do to modernize suffrage. ONPE’s call for next month is a good opportunity to show the world the advances that allow different countries in the region, as well as others from Europe and Asia, to have safe and reliable automated elections nowadays.

Smartmatic will show in Peru a technology that can cover all the stages of the elections in their entirety, from project management (logistics, recruiting, and training) up to satellite communication services, plus all the equipment to hold a completely automated voting event. Smartmatic´s solution for Peru involves biometric devices to authenticate the voters at the polling station, and touch screen voting machines to capture the voters´ intent. All of this while scrutiny, tallying, and transmission are done electronically. The equipment has modules to facilitate voting for citizens with motor, visual, and hearing disabilities.

Colombia’s Voting Solutions will work with a touch screen machine that contains a kit for the visually challenged (number keyboard and headphones). It also has an “administrative terminal” to incorporate the voting registry and thus identify voters for giving them access to the machines. Besides, it offers the option of biometry and digital signature.

The third invited company is Argentina’s MSA. Their machine works with software that allows the voter to “navigate” through the options to vote. It has a printer that reproduces the vote, and it also has mechanisms to store selections digitally in a chip. The machine also has a vote verifier and an assistance kit for the visually challenged.

These companies will accompany Peru in the new electoral event, and although at first glance they might seem to have similarities in the components of their equipment, they are vastly different in their method to shield suffrage and the whole process (encrypting, digital signatures, auditing possibilities), as well as in their capacity to attend to the production requirements. ONPE will have to consider which system adapts best to its necessities and select the most appropriate one to carry out its so-called litmus test: next November’s complementary elections. In this event, voting will be automated in two districts in Lima, where 1 million people are expected to vote.

Electronic voting will be used in Mexico for the first time this year.

2012 starts with new hopes for electronic voting around the world. Of the thirty countries that currently use automated voting systems, several will re-test the transparency and security of the electronic vote, but also other nations will prepare to meet the challenge of organizing their first automated elections and others will work in giving legal support to automation.

Having looked at the big picture, 2012 will add achievements to voting technology, but it’ll also test the political will of governments that promote the most effective, efficient and safe way than currently exists to exercise the right to vote: electronic voting.

Among the countries that are betting on join the still selected group of nations with automated voting are Mexico and Peru; meanwhile Dominican Republic will take a first step, automating a phase of the process -tallying-, and in Paraguay the authorities will debate a new legislation to enable electronic voting.

If they complete the programs they are set up, these Latin American nations will be an example of initiative. Doubt looms, since the responsibility and commitment of government authorities will play a key role in providing the resources to meet the processes and in guaranteeing safety in the adoption of electronic voting.

Venezuela will use Smartmatic machines in three elections this year

A case of special attention is Mexico, where in Jalisco -one of three states besides Mexico City and Coahuila that employ electronic voting- after an arduous struggle it was approved a hotly contested bid to automate the vote for the July 1st presidential elections. Although the process of the implementation is unknown, the expectation is that the program will run gracefully, since it will help to win the trust of the electorate, and therefore the nationwide implementation of electronic vote.

In Peru, the opportunity to prove that the electronic voting system designed by the National Office of Electoral Processes (ONPE) works, will happen in September when the eighth recall of municipal and regional authorities will be held. The electoral authority assures to be ready to repeat the success of the experience lived last June in the province of Cañete. The approval of resources will be crucial for the South American country to continue moving forward.

Meanwhile, Dominican Republic, will take a key step into  building trust to modernize their voting process. On May 20th, 2012, when the presidential elections will take place, is expected to automate the tallying as a preliminary phase to the automation of the whole process for 2016.

Another country that expects to change in 2012 is Paraguay. There, the political forces are pushing for the approval of a law regulating the vote of citizens living abroad, so that they can exercise this right in the general elections in 2013. The expectation is that the parliament advances the bill and that this will open a window for implementing online voting instead of voting by mail or in embassies. So far there is no decision, but time is running out for the Superior Court of Electoral Justice (TSJE) to have enough time to organize the elections.

Finally, we close with the revalidation of electronic voting in Venezuela and the United States. In both nations there will be presidential elections, but also in Venezuela the opposition will hold primaries to choose their candidate.

These two countries have shining examples when it comes to the automation of their processes. Venezuela, in partnership with Smartmatic, has more than twelve automated elections. Machines provided with biometric identification devices, touch screens, electronic ballots, paper voting receipt, tallying and transmission of results are some of the strengths that Venezuela’s robust system has.

In the U.S., there are multiple companies involved, since local authorities (counties) are the ones who decide which electoral system it will be used; this accounts for more than 3140 voting systems that are very different one from each other.  Among the models used in the US, we can find machines with touch screens, some with and without a paper voting receipt as well as ballots for voting and optical scanners for scrutiny